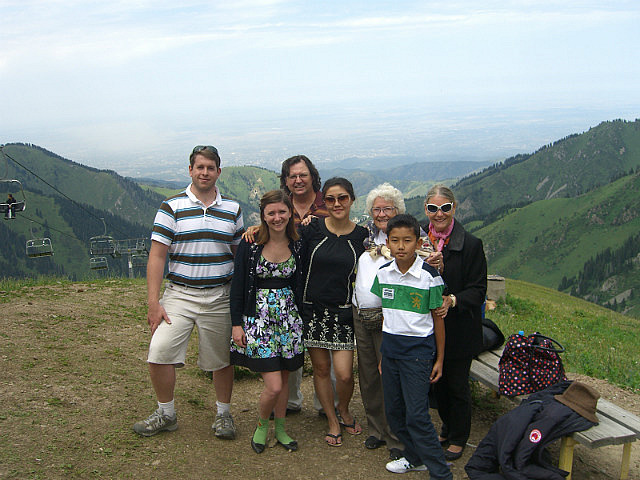 Our hotel – “Hotel Salem” is tucked away in urban Almaty amidst several apartment blocks. Except for the sign, you wouldn’t know it was a hotel at all.

Almaty has some old Soviet-era buildings along with more modern high-rises. It sits next to an impressive mountain range that is easily visible from the edge of the city.

The hotel had breakfast prepared for the guests – oatmeal, breakfast pizza, bread, meat and cheese. We ate at around 9 or so, then got ready to head up to the mountains. Altyn thought that we would enjoy a  day trip after our long flight.

A van had been arranged for us so that we could travel together. Our first stop was to change out money. Money exchange places are all over town, and have signs like gas stations out front showing their exchange rates. The local currency is the Tenge. $1 = 150 Tenge.

Our mountain destination was a park (we had to pay admission) that is high in the hills, and the site of the up coming Asian winter games. All along the way, construction of winter sport venues was under way – we had to drive around trucks and building material several times. We stopped at an overlook for some photos of the vista, then further up to the ski lifts. The lifts took up on a 20 minutes ride way up in the mountains – there was snow in several places – for a truly great look down the several thousand feet to the plain below.

Since it was regular ski lift, it normally would not stop to take on riders. Since we had granny – babushka – along, they made an exception on both ends, stopping just for her.

At the top, Wes, Sterling, Altyn and I took a bit of a jaunt further up toward the mountains peak. We made it about half way, finally huffing and puffing from the altitude and (for me at least) being out of shape. The cool mountain air was as invigorating as the spectacular vista.

We then had to beat it back down the mountain to make it for lunch with Aldet’s dad and step mom – Amondyk and Shamshat at a restaurant named Batir (Kazakh for soldier). We were served many traditional Kazakh foods – a variety of salads, bread, horse meat and horse fat medallions for the first course, then shish kabob  of mutton – of shaslik, in Kz. The shaslik was delicious (though Wes fist had to contend with a skewer of sheep liver – so he wondered why we were all going on about how good it was until he realized the difference.) Lunch took a couple of hours.

No sooner were we done than we had to zip back to the hotel to collect our bags for the trip to Astana. We got to the airport in time and met Adlet’s aunt, who would be traveling with us. The flight took 1 ½ hours (I slept the whole way).

Adlet met us at the airport and took us to Altyn’s mom’s apartment in the heart of the city. We arrived and were treated to a huge fest to welcome us. Stew, salads, horsemeat and soup. Altyn’s mom. Aigul insisted that we eat up.

After such a repast, we went for a walk down to the pleasant river walk area down town (about 3 blocks from the apartment). There is a wide promenade along the river through town. The town is lit up at night. That and the cool weather made for an enjoyable time.

To bed about midnight. Wes and I had a room with 2 fold out couches. Beck and mom got Aigul’s bed (she slept on the floor). Sterl and Altyn got the sister’s bedroom (they also got the floor, as did all the other guests who happened by).