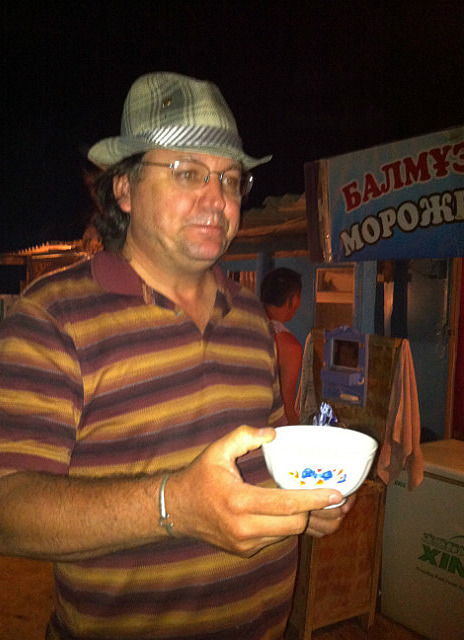 Up at 4:30 AM – on the road by 5:39 and out of town by 5:50. At about ½ hour out of the city, the terrain became flat and arid – just a few hills and then nothing as far as the eye can see. And this describes the landscape for mile after mile. We had breakfast at a little café/hotel. I had eggs, some had crepes. We were there for a while, owing to slowness of service. While there, we heard some English being spoken. It turned out that other group there were a couple from Colorado who were driving up from Almaty to Astana with their former exchange student.  What a small world.

We finally got back on the road and only were going for an hour when we were stopped at a checkpoint. Adlet was ticketed for not having his lights on. Each town of any size has a police checkpoint for which you must stop for a look by the cops.  Then back on the road for an hour or so until Adlet had a flat tire. We changed it – all the guys working together – in about 20 minutes at a small roadside rest stop. The café consisted of a converted shipping container where you would buy the food and a yurt in which to eat. The bathroom was a shed with a hole and two boards over it on which to squat.

We drove again through the dust and the heat (the air in Altyn’s car was out) ’til 2:00 Pm when we reach the city of Balkash. We stopped for lunch at a café that also fixed flats. They did, as we ate. We had Plof, Uzbek style – the difference being raisins – and dumplings filled with meat. Then back at it at 3:30. The only hiccough at this point was that the power had gone out at the café, and so they could fill the tire with air. Thus, we had to stop again to air up the tire and have it balanced. A little way on and we hit a crazy detour – marked by a pile of dirt and a small sign – down the most horrendous rutted excuse for road known to humanity for about 10 miles

We made pretty good time up until 8 or so, when the road itself began to degrade seriously After a few miles, it was a rutty pot holed mess, which was the case for the next 50 miles. Very slow going.

Finally, things got a bit better, and we took a few minutes (we were feeling the pressure to get there) to stop for an ice cream and some ‘shubat’ – fermented camel’s milk. This was much like unflavored yogurt, with a little bit of a twist. It was better than koumiss, at least. The only other stop was for gas.

We finally dragged in to Adlet’s birth mother’s apartment at midnight. That would be 18 ½ hours on the road through the ‘golden steppes’. When we got there, a meal was set out (of course). The apartment was a three-floor walk up. The stairs were decorated the whole way up to the apartment. As soon as we walked up, we were met at the door by many family members, including one of the aunts that came down the stairs with a fire burning in a frying pan, (we never found out what exactly that symbolized.) This being a two bedroom apartments, and there being 12 of us sleeping here, most of us slept on the floor – the exceptions being granny and Beck in one bed, and Adlet’s wheel chair bound sister, Monica in the other.