This year Wes and I will get to have two winters as today is the first day of winter in oz. An early start of 6:00 wasn’t a problem because our leftover jetlag is getting us up early anyhow. Kangaroo Island is the third largest Island in Oz, not counting Australia itself – which is actually the size of the continental US. Driving through the wine country of South Australia, between naps, we saw many grape vines and olive trees as the sun was rising. We were both reminded of Ireland/Scotland because of the rolling hills and steep cliffs. We reached the ferry at around 8 and had a rocky 40 minute ride over to the Island. There are something like 4600 people who live on the Island (no aboriginals because they believe it is an island for the dead) Kangaroo Island (K.I.) is akin to the Galapagos in that it is a sort of nature preserve with little influence from the mainland. Other than Koalas that were introduced because there are no predators on the island (other than fire which killed some 18,000 of them a few years ago), the only other animals that aren’t supposed to be there are pets. In fact, because there are no natural predators other than eagles, there is actually a problem on the island with Koala overpopulation. They tried to desex the Koalas but eventually realized it was cheaper and smarter to relocate them to the mainland.

Our tour started out with a long long ride to seal bay. It was windy, rainy, and cold but well worth it! We went for a stroll on the beach next to the seals. The guide explained that the female seals are pregnant pretty much their whole life long – seven days in between giving birth and being fertile again. Sounds horrible. The seals here were endangered but that didn’t keep them from enjoying the choppy surf. What an awesome experience to be a few feet away from these guys. They literally littered the sidewalk on the walk up and down.  One even snuck up on us while we were taking pictures.  He was just standing there barking at us and we slowly backed away down the path. 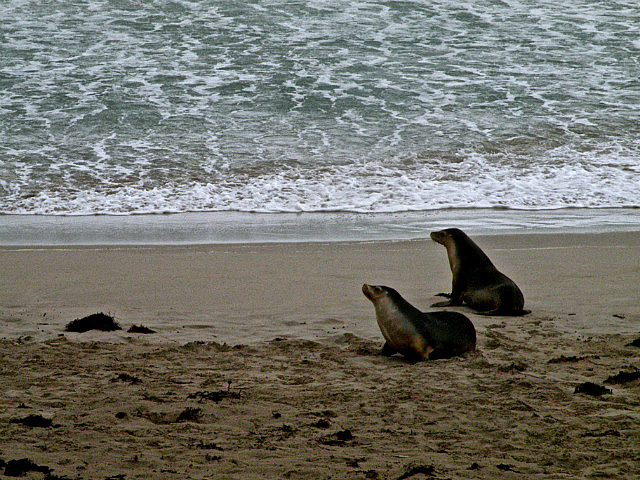 Another long ride and we were in the middle of nowhere for lunch. We sat next to some Aussie’s from Perth who were there on a mystery trip. Basically you pay for a trip at a reduced price and they let you know where you are headed the day before you take off. Sounds like fun!

Our next stop was to search for Koalas in the nature preserve. They were high high in the Eucalyptus trees – we saw about 4-5. Basically, they looked like little fuzz balls. The island is known for honey, so we bought a small jar at the preserve. It was DELICIOUS and a beautiful color.

Our guide was difficult to understand. He was talking quite a bit about chucks being eaten by Joanna (Chicks being eaten by Goanas), some problem with totes (toads), and also how great the eucalypt trees (Eucalpytus trees) were. We spent a lot of time figuring out what this guy was saying. We visited the Remarkable rock – granite from a volcano long ago. The formations were so unusual, the granite slippery, and the wind was quite strong (I had to bend my knees to stay put).  There were no rails and Wesley went way too close to the edge! I’m surprised he is still with us. Our next stop was some lighthouse that had a bunch of mercury inside (so all the lighthouse keepers went crazy). We then walked down to see a natural arch and new zealand seals. What a rough and windy place! Pretty neat feeling to know there was nothing between us and antarctica!  We then returned to the ferry early and enjoyed the only pizza on the island.  It was surprisingly good for being the only option.  We then slept on the ferry and bus ride back to our hotel and passed out as soon as we walked in the door.

DAY TWO:
With nothing planned for the day we took a long relaxing walk through the botanical gardens. Adelaide itself is surrounded by parks, a fact Wesley LOVED. The gardens were beautiful with many parrots and interesting plants. After a long stroll we ended up at rundle mall, a cute street with many shops. After than we took a tram (and didn’t pay because we couldn’t figure out how to) over to the beach town of Glenelg.